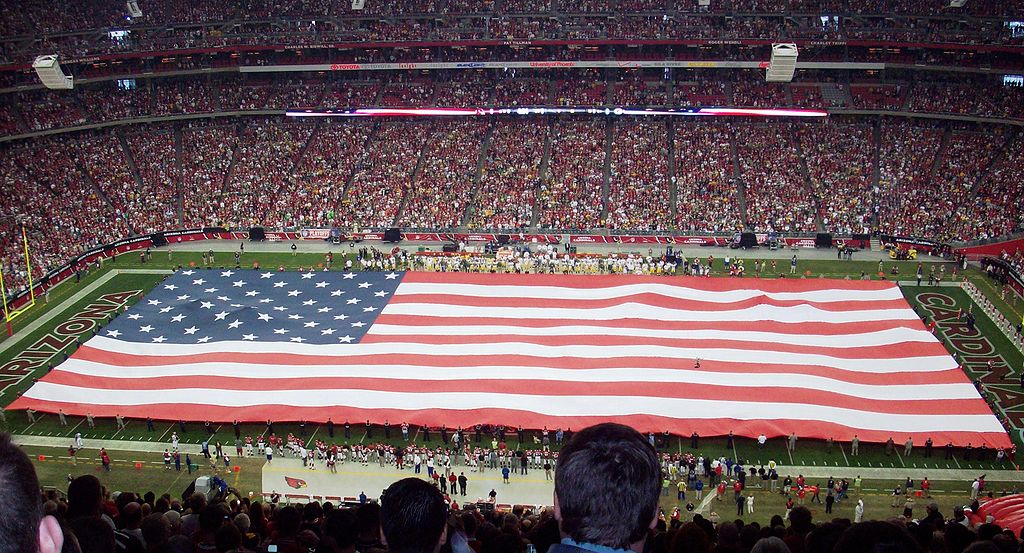 I’ve been trying to think about explaining the grip the NFL has on America. It’s far and away the most popular sport in the country. The profit generated by every last one of the league’s 32 teams despite previously playing only 16 guaranteed games in a season is nothing short of extraordinary. And now we’re in NFL Draft season, for which it feels only a matter of time before it’s declared a national holiday.

On a philosophical level, football very much appeals to our national ego. There’s the militaristic connotations, with the game’s armor, blitzes, bombs, ground assaults and whatnot. Rugby and wrestling have a similar brutish nature, but another component of our nationalism is a desire to say that we created something, that it’s our contribution to the world. And we created football. The fact that football is our baby is the main reason I think the game will never gain global adoption, and placing a franchise in London or Mexico City would be a fool’s errand. England and Mexico kind of turn their noses up at this savage game that totally captivates us, and we know this because if they didn’t, they would be playing American football in their countries. The funny thing is, though, it would be hard to tell if it was a bad idea to place a franchise out of the country. The international franchise would make a bunch of money because nobody in the NFL loses money, and the stands would probably be filled (maybe in large part by American expats), so it would be difficult to argue the league made a strategic error in the face of those two facts.

Then there’s the question of how the NFL has come to dominate college football. That’s relatively easy to explain – there are fewer moral quandaries that come with being an NFL fan. Yes, NFL players risk catastrophic injury and crippling concussions every time they suit up, but at least they’re handsomely compensated. There’s other factors that explain the superior attractiveness of the NFL – college football’s great programs are disproportionately concentrated in an area of the country that we on the coasts like to regard as an alien habitat, and college football will never feel completely inclusive given that not everyone can experience the tightest type of bond to a college football program, being a student or alum. The compensation versus no compensation duality explains most of the disparity, though.

Finally, the competitive construction of the NFL is wonderful. The salary cap/salary floor constraints coupled with the ability of teams to get out of bad contracts before they expire means no team should be terrible for more than a year or two. The NFL Draft doesn’t even need a lottery like other major sports leagues do because you don’t really see teams “tank” – head coaches and quarterbacks know they’re going to lose their jobs if the team stinks, so they try to win year in and year out. Even if a team does enter a season with a mediocre roster, all it takes is besting the three other rivals in your division to gain a coveted playoff spot – look at the Washington Football Team in 2020. The Draft is so exciting because the players selected are all familiar, coming fresh off of the high-profile college stage, and they’re expected to contribute right away. I could go on, but the bottom line is this – NFL fans can always see light at the end of the tunnel. The Houston Texans have made just about every roster-building error imaginable in the last two years, and somehow their fans are still more engaged than Arizona Coyotes, Colorado Rockies or Detroit Pistons supporters. Unceasing fan investment – that’s the top priority of anyone trying to create a great sports league.

The 17th regular season game has been added for this upcoming campaign, and an 18th is on the way. Soon, NFL football will be played on more than half of the Sundays in a calendar year. I think the last two games are overkill, but this is the National Football League we’re talking about. Games number 17and 18 will only be another boon for the league.

Punt the Pigskin: Why We Should Stop Watching Football