Trailer Takes: The Perfect Date, The Silence, and The Angry Birds Movie 2 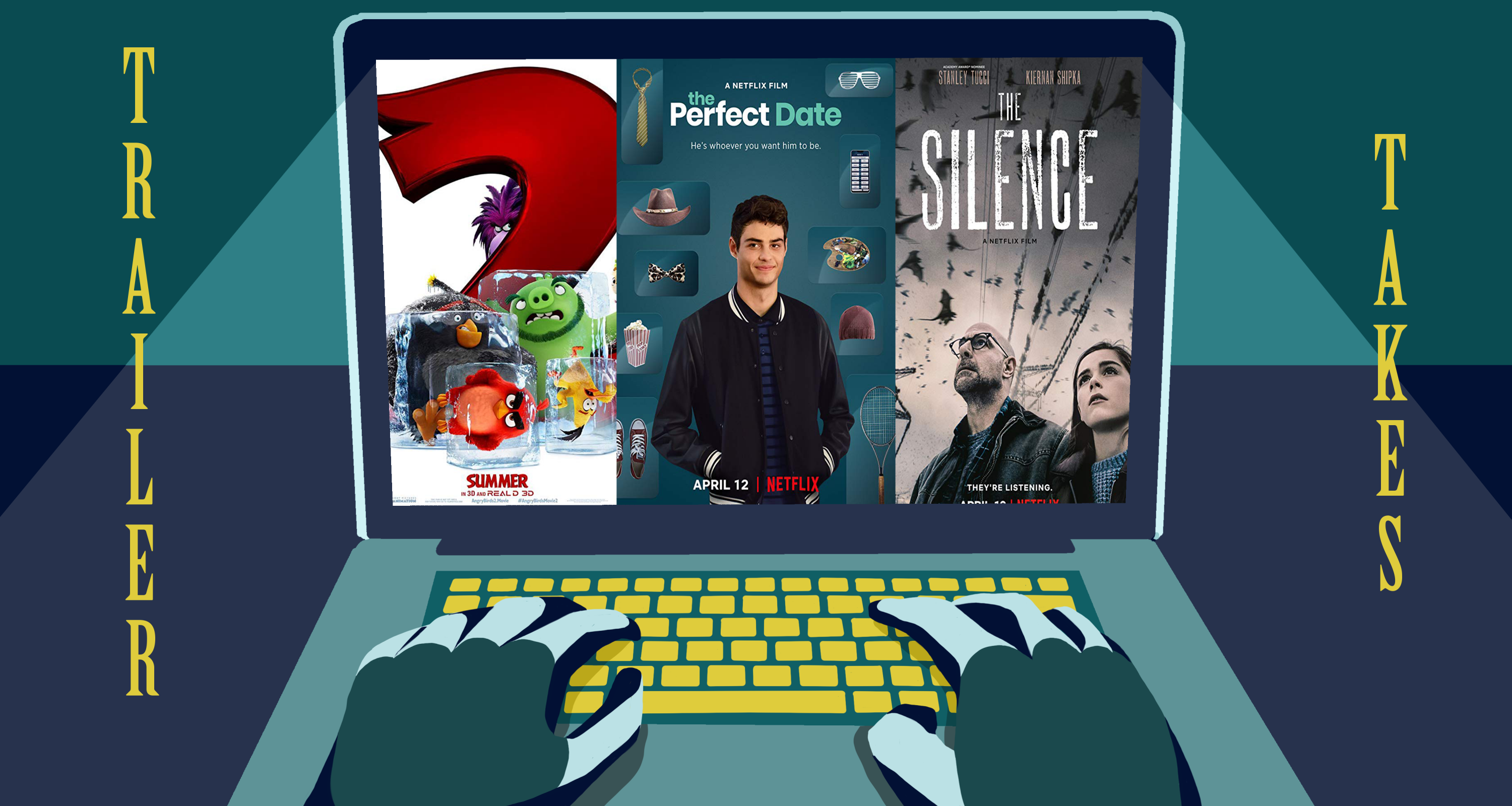 Aaron: “Do you even need to see the movie now?” It may be a complaint I see in the comments under pretty much every trailer I’ve watched recently, but this trailer takes it to a whole new level of ridiculousness. I’m almost certain that after watching this trailer, I could write the entire Wikipedia plot summary of this movie scene by scene and not be too far off. I have to admit that I said something similar about To All The Boys I’ve Loved Before (2018) and was pleasantly surprised. But that film benefited from a fantastic breakout performance from Lana Condor and her compelling on screen chemistry with Noah Centineo. Centineo again plays the male lead in this movie, bringing along his irresistible charm; however, neither of his female counterparts demonstrated much in the way of chemistry or depth of character. Netflix is continuing its strategy of mixing and matching its young stars, this time combining Camila Mendes and Centineo. The addition of Mendes will certainly draw some Riverdale fans, but her talents seem wasted playing a love interest with little to no personality. Unless The Perfect Date (2019) reaches the level of cultural phenomenon that To All The Boys I’ve Loved Before did last August, I’ll be continuously skipping over it in my Netflix dashboard.

John: After watching this trailer, I feel as though I’ve already seen this movie. Not just because the trailer already revealed pretty much the entire story arc. Plenty of trailers do that nowadays and, while it is frustrating, the issue is not unique to this film. No, the other reason I feel as though I’ve already seen this movie is because Netflix has apparently taken up the task if trying to craft the most bland, cookie-cutter film that has ever been conceived. The attractive male protagonist is trying to accomplish some extraneous task and winds up befriending an equally attractive female lead. The guy ends up falling for some other girl who is clearly a mismatch for him, and it’s revealed that the female lead actually loves the protagonist. The movie resolves with the two leads getting together. Done. All set. Bam. You don’t need to watch this movie or this trailer anymore. There’s literally nothing else to it.

Juliana: I love how Netflix first tested my love for Noah Centineo with the very troublesome Sierra Burgess Is a Loser (2018) and now with whatever this is. Look, is he still great? Yes, but come on. The graphic designs for the titles and transitions were so cringe-worthy that I noticed them. The music on the background played “big black boots on my feet” while literally giving us shots of a girl’s black boots as she walks down the stairs. The film seems to desperately be trying to sell that Camila Mendes as the love of Centineo’s life, but she has exactly one line in this entire trailer and zero signs of having a personality. Heck, she could still be playing Veronica Lodge from Riverdale and I wouldn’t know the difference. Netflix, you’re not fooling anyone: we all know Laura Marano is playing the romantic lead on this one, not Camila. I might end up watching this one while extremely bored and browsing through Netflix, but it won’t distract me from the fact that I’d rather be watching a To All The Boys I’ve Loved Before (2018) sequel.

Aaron: For a genre that is desperately in need of some originality, this is so glaringly a step backwards that it is almost laughable. (One of the kids is deaf in this one too? Are you kidding me?) Stanley Tucci is a phenomenal actor and I just finished watching Mad Men all the way through for the first time, so Kiernan Shipka holds a special place in my heart, but this is just too trite to get me excited in any way. My only genuine reaction to anything in the trailer was some muffled laughter when the film attempts to gain creativity points by having Billy MacLellan’s character forgo the traditional ‘Shh!’ symbol for a neatly written out version instead.

John: It looks alright. Not great, definitely not very unique, but to me it doesn’t immediately come off as a bad or poorly produced movie, which is a plus. That said, am I going to go out of my way to watch it? Probably not. I’m not huge on horror movies to begin with, but on top of that this appears to be just one more movie to add to the list of sensory deprivation films that has slowly overtaken the horror genre. Netflix in fact already released one of these, Bird Box (2018), at the end of last year. It’s not hard to imagine genre burnout negatively impacting this movie’s performance. Apart from all of that, I also think it was a mistake to reveal the monster itself so clearly in the very first sequence of the trailer. Whatever I was picturing was stalking that poor family in the woods was much scarier than the fun-sized pterodactyl swarm that was shown.

Juliana: Have I been accidentally transported back to 2018? Is this A Quiet Place (2018)? I really didn’t know what to make of this trailer, so I looked it up. Let me tell you: when Wikipedia lists another film as having a similar premise to yours, that’s not a good sign. Obvious comparisons aside, there is nothing on this one that really makes me want to watch it. I’m not a huge fan of horror and this kind of seems to be your usual jump-scare-fest with monsters that deprive you of one of your senses for survival. In other words, pretty much half of the horror movies that have been released lately. It might be a good pick for any Kiernan Shipka fans or tame horror aficionados, but I’ll pass on this one.

Aaron: Sony’s last animated movie was Spider-Man: Into the Spider-Verse (2018). I’m going to go out on a limb and say it’s possible that this will not measure up. Look, movies based on video games are almost always terrible. Movies based on mobile games? They can’t be much better. But seeing as this movie bears almost no resemblance to the app (I did not spot a single green pig plummet helplessly to its death), I guess that doesn’t really apply. The movie seems to rely heavily on physical comedy which kids love and the jokes are so simple that they aren’t even really jokes, but merely unexpected lines of dialogue that you don’t typically hear out of adults. What I’m trying to say is, if this came out when I was five years old, it would have probably cracked my top ten movies of all time.

John: The trailer doesn’t exactly sell the movie, rather than simply reinforce my preconceived notions about it: it’s simple, it’s cute, it’s for kids, and it’s not something I’m going to go and watch. The plot is clear cut and easily digestible while (appreciably) not having the ending completely spoiled, and the animation itself actually looks pretty good. The filmmakers did a good job translating the game sprites (which may I remind you are all ovals with no arms or legs) into actually functioning characters with discernible features. The app hasn’t been downloaded on my phone for many years at this point, but I was still able to recognize each of the birds when they appeared on screen without any difficulty. Overall, while not the next critically-acclaimed masterpiece, The Angry Birds Movie 2 (2019) seems like a reasonable option for parents who desperately need to entertain their toddler.

Juliana: I haven’t watched the first Angry Birds (2016) movie, nor have I even played the video game itself on my phone, so I’m not sure if I’m missing anything. I’m assuming we’re back to the films spinning some sort of plot out of the game, now with the addition of a new enemy island. There’s nothing in here that would make me rush to the movie theatre and spend my money on a ticket, but I guess that’s because I’m not the target audience for this one. It’s not the film that I’m most looking forward to this year, but at least it’s not an Emoji Movie (2017) sequel. I’ll probably be skipping this one unless my six-year-old sister desperately needs someone to take her to watch this over the summer. 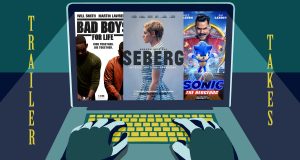