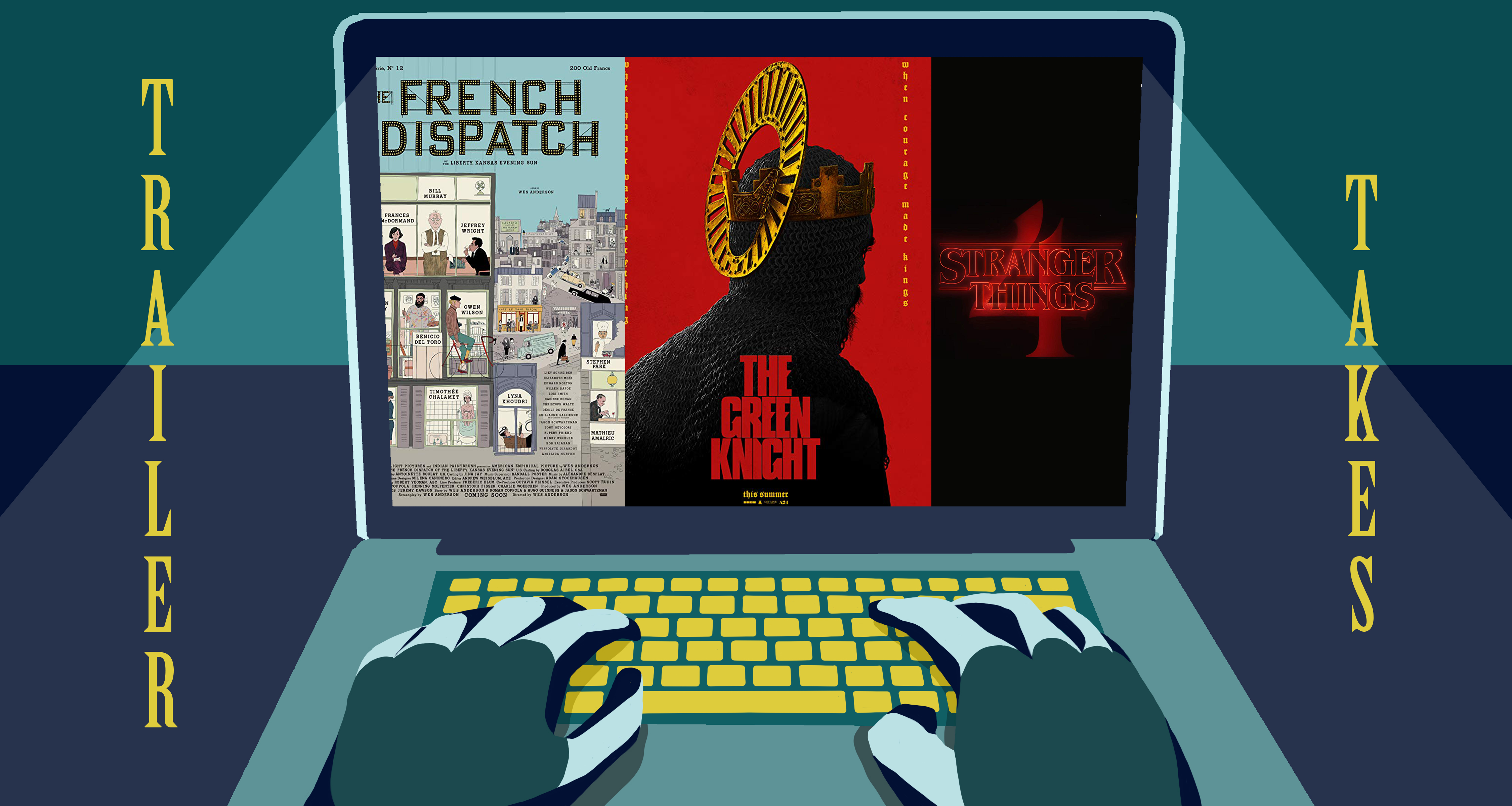 Roman: One of my favorite directors of all time (Wes Anderson) making a movie about one of my greatest passions (journalism)? I can hardly contain myself. While he may never reach the highs of Fantastic Mr. Fox (2009), Anderson’s quirky and off-brand sense of humor shines through in this trailer. Obviously Timothée Chalamet working opposite Frances McDormand is a top draw, but I am even more excited to see Adrien Brody and Benicio del Toro collide on screen. I was actually just thinking about Brody the other day (while cursing the Academy for giving Polanski the Oscar for The Pianist) and I am happy to see him back on the silver screen. Anderson’s track record speaks for itself, and I will be in the theater on July 24.

Blythe: I’d be hard pressed to think of a director with a style as identifiable as Wes Anderson, but that’s what we all love him for. Nothing is quite as satisfying as his deep love for symmetry and consistent color schemes. The French Dispatch unsurprisingly incorporates long-time cast members like Owen Wilson and Bill Murray, but also the debut of new cast members like Timothee Chalamet. This addition seems incredibly natural given Chalamet’s rise to indie stardom and commitment to acting alongside Saorise Ronan. I’m curious to see if Anderson manages to fully articulate what appears to be three different story lines, as this can often be a daunting task in film. However, this is a man I trust. Anderson’s style is so established that it has become arguably comfortable. Even without really knowing the story line, I know what this film will be like. Knowing that The French Dispatch will be quirky and delightful is what makes it one of the film’s I’m most looking forward to this year.

John: Another Timothée Chalamet and Saoirse Ronan movie? Just take my money already. This trailer perfectly showcases Wes Anderson’s signature style, and honestly I’m not sure if I’m starting to get sick of it or just starting to fully appreciate his genius. My only critique of the trailer would be that after watching it I have no idea who the main characters are, who is related to who, or what the premise of the film is. It’s about a magazine? OK, but what does Timothée do? And where is Saorise? I am definitely going to see it, even if just for the cast alone. But it does look like The Grand Budapest Hotel (2014), but in France this Time.

Roman: They had me at Dev Patel. The sight of Patel’s majestic mane under a crown, and later scenes of him swinging a broadsword, piqued my interest due to my firmly held belief that Patel is one of the most talented (and handsome) actors of our time. I am intrigued to see what director David Lowery will do with the Arthurian source material. Thus far in his career, Lowery has thrived on smaller, character driven films, such as A Ghost Story (2017), or The Old Man and the Gun (2018). This would be seemingly at odds with the action packed trailer we see here. I think there is a lot of room to let Patel explore the character of Sir Gawain who, depending on the legend you read, is one of the more complex knights of the round table.

Blythe: If there is one thing I deeply appreciate in this trailer (besides how beautiful Dev Patel is), it’s how little is given away. In an era of excessively long and revealing trailers, this one remained vague, but in a way that sparks curiosity. The potential for Green Knight to be influenced by A24’s previous thriller standouts like Hereditary (2018) and Midsommar (2019) definitely peaks my interest. Given the film’s Arthurian source content I think it could add a unique twist to have a darker, psychological tone as opposed to the colorful, bright medieval fantasies that these tales tend to be adapted into. It could be a dark fantasy that brings something new to the genre, actually standing out from Game of Thrones, to which any gritty fantasy is still inevitably being compared. I have also desperately loved Alicia Vikander ever since her role in Ex Machina (2014), and she and Patel could definitely be a powerful acting duo. Overall, there seem to be a lot of variables working in Green Knight’s favor, and I’m curious to see how it ends up working out.

John: Games of Thrones meets Pan’s Labyrinth. OK, I think I’m here for it. But, the trailer kind of reminded me of the advertisements for Brave (2012), when they made it look like the whole movie was about archery and then that was less than five minutes of the movie. I enjoyed the cinematography, with the spinning shots and the burning heads and skulls, but I have no idea what’s going to happen in the film. The little puppet booth was cute yet  suspenseful, but I’ve had my fill of Medieval dramas with gory fight scenes and a hint of magic. This trailer didn’t offer anything special enough to make me excited about the film, and I feel like that should be the whole point of a trailer.

Roman: I feel as though I really should be disappointed. When Chief Hopper (David Harbour) was supposedly killed at the end of Season Three it felt like a pivotal moment for Stranger Things. For too long, the consequences on the show have felt low. I knew none of the main characters were going to die, and I feel like some of the show’s suspense was lost when I knew that only the red shirts would be dying. So Hopper’s death felt like a way for the show to reignite the stakes. The scene at the end of the third season where Eleven (Millie Bobby Brown) read Hopper’s final letter felt cathartic and was a beautiful end to Hopper’s arc. This should be disappointing. Emphasis on should. Because HOPPER IS BACK!? WE HAVE 40 NEW SECONDS OF STRANGER THINGS FOOTAGE!? INJECT IT INTO MY VEINSSSSSSSSSSSS.

Blythe: I must admit, I haven’t watched a season of Stranger Things since the first one. I did enjoy it, but also got lazy. So last time I watched Stranger Things, it was still about 80s aesthetics and the Upside Down. Yet here we are, three seasons later, in Russia. What I have gathered is that Hopper supposedly died at the end of Season 3, but that it is actually less surprising than the fact that he’s somehow still alive. What was definitely intended to be a big reveal instead falls somewhat flat. This general sentiment of feigned surprise is honestly making me less motivated to try and catch up for this upcoming season, because nothing makes me lose investment in the stakes of a show more than fake-out deaths. Keep your stakes high, Stranger Things.

John: Does this qualify as a trailer? Because it feels more like a teaser trailer. All we know is that David Harbour has now made his way to Russia, working at what looks like a very Les Mis, Jean Valjean-esque labor camp. Oh, excuse me, but it’s snowing now. I loved the first season of Stranger Things, but I feel like every season gets progressively worse and detracts more and more from what I loved so much about the first season. The supernatural elements get more and more unbelievable, the characters get freakier and freakier, and I still don’t like Millie Bobby  Brown. I guess what I’m trying to say is that this trailer really didn’t do it for me, nor did it make me want to watch the upcoming season.