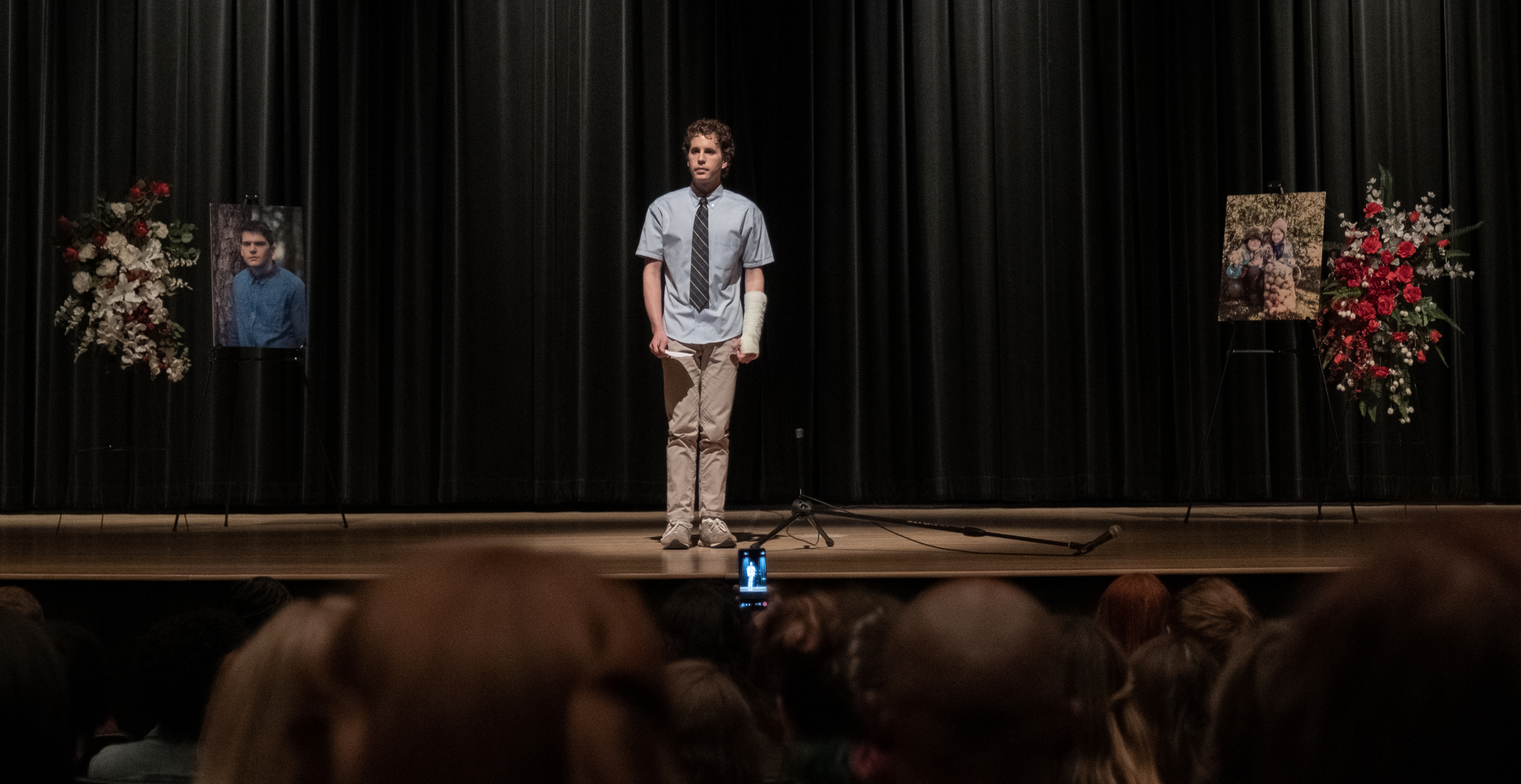 Well, like it or not it is here: the long-awaited film adaptation of the smash-hit Broadway musical Dear Evan Hansen. Theater fans may reasonably go into this experience with a sense of dread: movie musicals, especially adaptations from the stage to screen, tend to miss the mark. Dear Evan Hansen missed the mark, too, but not by a lot.

The movie was fine. It included some truly fun parts and some tragic mistakes. A number of the musical numbers translated well to the screen while others completely bombed. The attempts at adapting the story to fit an ever more socially responsible world were obvious. Even though the intentions were presumably noble, the execution felt cheap.

To be specific, the handling of mental health in the film felt very different from the way mental health was handled in the musical. The message of the musical surrounding mental health was ‘you are not alone,’ meaning, if you are struggling with your mental health you can reach out and ask for help. Again, in the film the message was ‘you are not alone,’ but this time it meant you are not alone in struggling with your mental health, everyone else is facing similar challenges, too. At one point, two characters even compare what medications they are taking as a way of bonding and building trust. There is nothing inherently wrong with this moment and it expands both of their characters more than the musical ever did. However, it came across like the writers were name dropping in a last minute attempt to sound up-to-date.

To fans of the musical: go see it. Even if you want to scream at the screen in frustration at points, it is worth seeing. At the very least, it is a reminder of what made the play so good in the first place. To anyone else: go see it for the Georgetown Easter Egg.

Dear Evan Hansen is the story of a high school junior with no friends. His crippling anxiety has prevented him from creating any solid relationships despite his longing for companionship. On the first day of school, in an attempt to get him to interact with his peers, his mom tells him to have other kids at school sign his cast. The first day is less than a social success but it does introduce Evan’s family friend, Jared (Nik Dodani), and Evan’s crush, Zoe (Kaitlyn Dever), as well as Zoe’s brother, Connor (Colton Ryan). At the end of the day, Evan goes to the computer lab to work on an assignment from his therapist in which he is supposed to write an encouraging letter to himself. Before he can grab the print out of his letter Connor intercepts it and reads it. The next day Evan is called to the principal’s office. There he meets Connor’s parents, and they tell him Connor died by suicide the night before. With him, they found the note Evan had written to himself, now believed to be Connor’s suicide note to Evan. And so Connor’s parents believe he and Evan were friends. Evan is unable to deny the claims, and his relationships become increasingly complicated as he gets everything he wants for all the wrong reasons, ultimately culminating in him losing it all.

The general tone of the movie is dark, much darker than the musical. The color palette is dull and stays within neutral darks up until the final scene between Zoe and Evan. Evan wears lots of blue, beige, and gray, as is typical of the character. His aura extends to the costuming choices of other characters as well as the lighting. This visual darkness is reflected in the humorless tone of the film, which is a shift from that of the musical which embraces the ironic, dark humor. It makes the piece feel more like a horror movie than a musical aimed at teens. Amy Adams’ portrayal of Cynthia Murphy, Connor’s mother, was the final straw in making it fully creepy. She placidly smiles as she constructs this imaginary story about her son in which he was a good person who was simply misunderstood. Her delusions are terrifying in how strongly she believes in them and how adamantly she defends them to others who question Connor’s character. It was not pleasant. Adams’ interpretation of a distraught mother came off as a little bit too delusional.

Was Ben Platt a believable high schooler? No. Not at all. Was Ben Platt phenomenal? Yes, he always is. But the attempts to make the 27 year old look like a 17 year old did not work. Really, all they did in the end was give him curly hair, so Platt looked out of place in a high school setting. However, he is not alone in being much older than the character he portrays. Ryan, Dever, and Dodani are all in their mid-to-late 20s and are playing sophomores and juniors in high school as well. This is not a Ben Platt issue, it is an industry issue and a very common one.

Major age differences aside, every single actor was incredibly talented. The musical numbers were recorded live, a choice that, though jarring, showed off the true musical prowess of all. When “Waving Through A Window” began playing, it was immediately clear that the tracks were not pre-recorded which was a pleasant surprise. The norm for many major movie-musicals is to pre-record the vocals, regardless of the actor’s ability. This was a nice change of pace and certainly set the film apart from others in the genre, and fantastic singing was bolstered by some sparse but very fun choreography. Despite the overall darkness of the film, the dance numbers did add a lightening-up element. The old Broadway razzle-dazzle may not have been there, but the beautiful music and vocals were captivating enough that the lack of sparkle was only an afterthought.

The biggest crime the movie committed was cutting the songs “Anybody Have a Map?”, “To Break in a Glove”, and “Good for You”. In their place is “The Anonymous Ones”, sung by Alana Beck (Amandla Stenberg) to justify her decision to release Connor’s alleged suicide note. It is a pretty song and it is nice to see Alana have her moment, a contrast to the stage show where her character is not quite fleshed out, but it is in no way better than the three cut songs. Expanding Alana’s character and creating a deeper motive for her doing a really awful thing were good creative choices, but the addition of the song felt completely unnecessary.

Another major offense was the treatment of “You Will Be Found”. Watching that number live and in-person gives the audience intense chills—it is overplayed for a reason. The stage show features an awe-inspiring moment in which a cacophony of voices and a flurry of posts appear as large projections. But the use of social media to show Evan’s moving impact on others completely failed on the silver screen. It was not nearly as powerful; it felt oddly normal to watch people go on social media and simply interact with a post. We all do that every day. It was incredibly disappointing considering the many possibilities which are available to filmmakers.

What single-handedly saved this movie was “Sincerely, Me”. It had all of the same fun energy as the original rendition, but the director took full advantage of the flexibility that film allows as compared to theater. The song was made even more exciting and engaging by cutting to clips of Evan and Connor’s fake friendship with accompanying alternate scenarios and dance numbers. It felt like a breath of fresh air, an entrance into the realm of what film can really enhance about a piece.

The ending of the Dear Evan Hansen movie is different and it is not better. Unlike in the musical, Evan publicly admits to lying about being Connor’s best friend. He posts a video on the internet and the audience watches everyone see it and waits for this kid’s whole life to be ruined. Except, it is not ruined. The greatest consequence to the admission of his sins is dirty looks from people at school. The attempt to make Evan into a surface-level good person, which he is not, feels like a half developed ‘what if…’ thought. What happens if Evan publicly apologized? Nothing. It is not realistic. That was by far the most frustrating part.

This movie was fan service. It could not stand on its own without the musical to back it up and it does not feel nearly as radical as the musical did when it first began to gain traction. However, the attempts at expanding Zoe, Connor, and Cynthia’s stories were appreciated within the context of the pre-existing story. This revised version of the story of Evan Hansen put a stronger emphasis on mental health and medication. It more clearly depicted that it was not just Evan and Connor struggling, it was nearly every character, particularly Connor’s mother and Alana. Though it has only been five years since Dear Evan Hansen opened on Broadway, the conversation around mental health has changed and the film reflects the new narrative.  Dear Evan Hansen is a powerful and gut wrenching story, and that is not lost in the film adaptation. As always though, the devil is in the details and the devil got the best of Evan this time around. His words really did fail.