One minute and thirty seconds.

That’s the total amount of time I have seen my sexuality explicitly represented in popular media. In the minute-and-a-half-long clip from Sex Education, Florence talks to a sex therapist and discovers that she, like me, is asexual. Though Florence and I share this element of our identity, we differ in our anxieties over that sexuality. Florence fears that her asexuality, a sexual orientation characterized by the lack of sexual attraction, means she is “broken,” missing a fundamental part of how people love. My biggest fear has been the opposite—that my lack of sexual attraction would mean that no one would ever love me.

Until recently, though, I had been lucky to live in an environment that eased my fear. Within a month of coming out in eighth grade, I had a boyfriend, temporarily proving to myself that I was still loveable. My friends, most of whom were queer as well, already knew about asexuality and how expansive the category is. They asked respectful questions about my specific experiences and worked to understand my particular identity.

When I was 19, however, I started a job where my coworkers were more representative of the general population—that is, far less aware of asexuality. When I was outed at work, it was clear that unlike for my high school friends, the topic was foreign to them. They assumed I was incapable of love and uninterested in dating, and began to debate my hypothetical sex life in ways that, though they probably didn’t realize, were invasive and demeaning.

Witnessing their ignorance on the topic, my fear of never being loved began to creep back in, encompassing me in despair. As I searched for why my coworkers treated me this way, it became clear that the misconceptions and debates that surrounded me stemmed from the lack of ace representation, leading to a general lack of understanding.

Like me before watching the Sex Education clip, my coworkers had never seen an ace person in media. And even after the episode aired, if they had watched Florence struggle with her sexuality on screen, they would have only understood a small portion of asexuality—the clip neglects many of the nuances of the identity, such as the range in willingness to engage in sex within the asexual community.

I don’t blame my coworkers for their ignorance. Chances are they didn’t spend the majority of eighth grade hunched over Instagram infographics about asexuality the way I had. But even if they had embraced the opportunity to learn about asexuality and made an effort to understand me through online research, they probably wouldn’t have gotten very far. For years, I have had to grapple with the lack of representation of my sexuality. I’d spend frustrating hours trying to find data that would validate asexuality only to end up with articles about bacteria, or ask the internet questions about ace issues and receive zero results.

So how do we inform ignorance and change the lack of information available about asexuality? How do we prevent that ignorance from sending asexual people down spirals of fear? The answer is simple: We teach about asexuality in school.

Schools have begun to discuss different sexualities as a part of their sex ed curricula, finally addressing the fact that not everyone is straight. Though the U.S. public school system has a long way to go in teaching about non-heterosexual orientations, the recent push has been a major step for inclusion. It would be so easy to just add asexuality into that discussion.

While the same lack of resources that I’ve faced in researching my own sexuality will make it hard to create a full curriculum for asexuality, that doesn’t mean it can’t be done. This curriculum must explore the fact that asexuality is a spectrum with no set level of sexual attraction experienced by every ace person. It must also highlight that asexual people have varying levels of comfort with sex, meaning even those who experience the lowest level of sexual attraction may not always be abstinent. To help support this, the curriculum should outline that there are many reasons outside of sexual attraction for ace people to be sexually active, including wanting children, seeing sex as a good way to get closer to one’s partner, or even just for pleasure.

This curriculum would begin to validate ace peoples’ feelings. By teaching them that asexuality is even a possibility, ace youth will be able to discover their identity sooner and understand they are not alone in the way they feel. This sense of belonging is vital, especially as asexual youth experience higher levels of depression and anxiety than the general LGBTQ+ community. It will also lessen the alienation of asexual people within the allonormative world. By teaching this information to allosexual, as in non-asexual, people, they will be more likely to understand the nuance within asexual identities and less likely to write off relationships with ace individiuals, making asexuals feel less alone.

Teaching about asexuality would also benefit allosexual individuals. Though the definition of a relationship has grown past traditional heterosexual monogamy, one thing that hasn’t changed is the seeming requirement of sexual intimacy. This makes relationships involving asexual partners a radical example of non-traditional relationships. By seeing that such deviations from the norm are possible, all people would be increasingly comfortable with choosing the dynamics they want for their own relationship.

All these reasons for teaching about asexuality are important. But at the most basic level, one fact stands above the rest: One minute and thirty seconds is not enough time for people to learn about a community that is almost equally as diverse as the rest of the LGBTQ+ community. So let’s increase this time. Let’s embrace a new page in our sex ed courses and teach people about the asexual community. 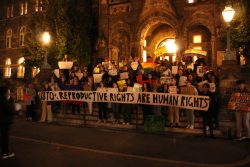 By Anthony Bonavita and Margaret Hartigan

This is really important – I am an Ace in the UK aged 38 and making it my mission to have Asexuality included in our school teaching. Allomormativity is so damaging for Aces and it is unfair to deny the next generation a supportive landscape to be their authentic selves. Well done you :) x