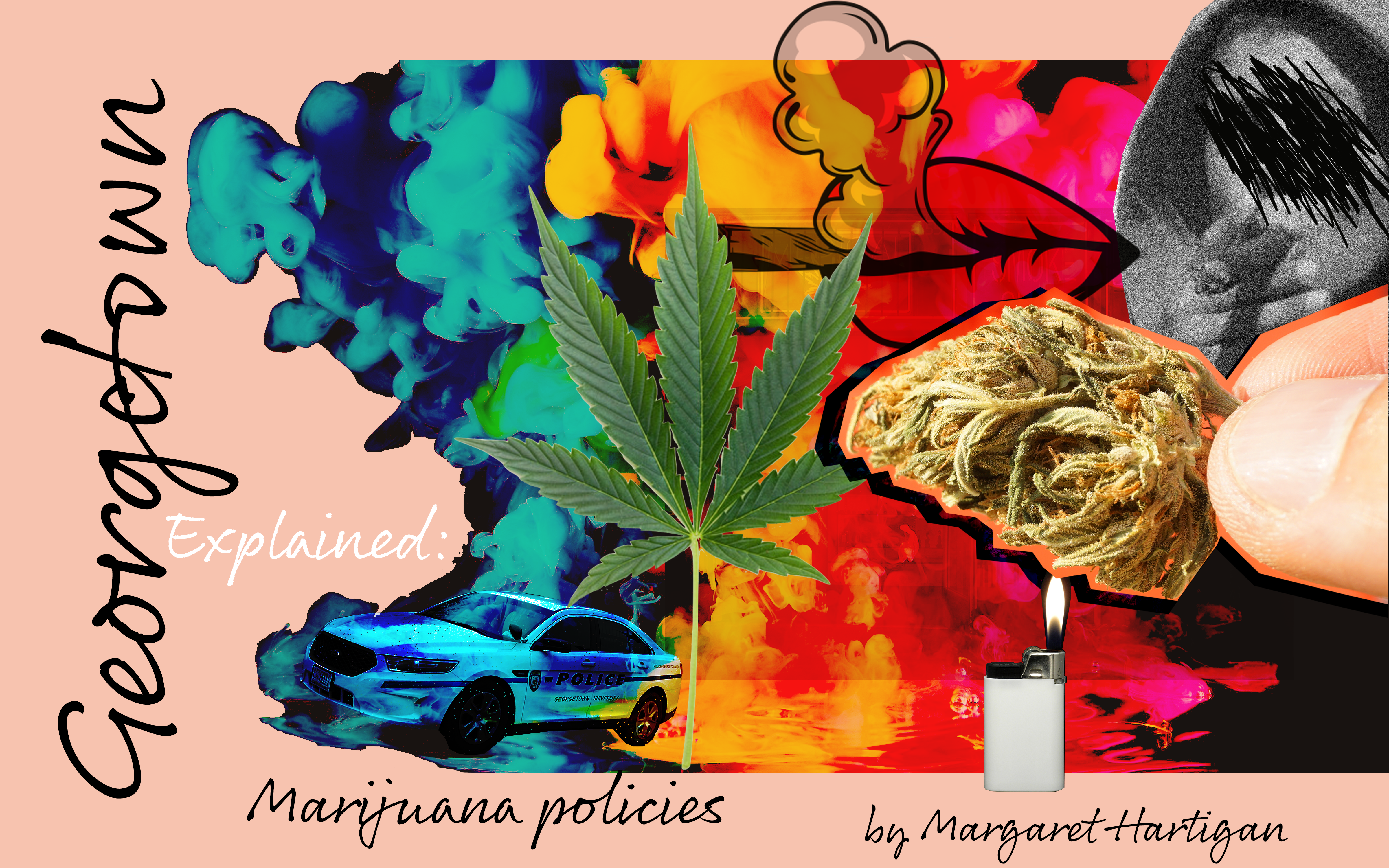 Editor’s Note: All interviewed RAs have been granted anonymity as Residential Living employees are not permitted to speak to the press about their roles.

Washington, D.C. has relaxed its marijuana laws significantly in recent years, reflecting a changing understanding of drug safety and equity. Georgetown University’s official drug policies, however, have not followed suit.

Following years of advocacy, the residents of D.C. voted overwhelmingly in favor of Initiative 71 in 2014, which legalized the possession (but not sale) of limited quantities of recreational marijuana for those 21 years or older. Due to the drug’s status as a Schedule I narcotic, however, Georgetown’s drug policies have not changed, and marijuana remains banned on campus even for medical use.

“While the District of Columbia has changed marijuana laws in recent years, possession, use, or distribution of marijuana, including medical marijuana, remains illegal under federal law. Georgetown’s policies and enforcement for both alcohol and drug violations have remained consistent,” a university spokesperson wrote in an email to the Voice.

While colleges that receive federal funding, including Georgetown, are required to maintain marijuana bans, they have discretion over the way they enforce it on campus. At schools like Williams College, Syracuse University, Rutgers University, the University of Vermont, and Bates College—all of which lie in jurisdictions that have decriminalized marijuana—sanctions were revised after decriminalization to make their marijuana and alcohol penalties comparable.

Students face far-reaching sanctions if found guilty of drug violations. Georgetown’s continued stringent marijuana policy impacts students who are employed on campus, including those whose housing is linked to employment, like residential assistants (RAs). Disparate disciplinary measures for drugs as compared to alcohol have inequitable effects on student academic statuses and eligibilities to study abroad.

RAs also face difficult decisions when handling drug incidents. For alcohol cases, RAs write up reports and observe the disposal of alcohol in their own residential halls. In cases where RAs suspect marijuana use or possession, they are instructed to immediately call campus police.

At Georgetown, policies regarding the use and possession of marijuana continue to be stricter than those for alcohol. A first-time alcohol offender, for example, would face no probation, a $50 fine, and five work sanction hours, according to the most recent Sanctioning Guide from the Office of Student Conduct (OSC)—which handles all alleged student alcohol and drug policy violations.

A first time illegal drug offender of any kind (including marijuana), on the other hand, would face two semesters of disciplinary probation, a $100 fine, and five work sanction hours. By the second offense, a student faces likely suspension—a punishment they would not face after three consecutive alcohol violations.

Punishment for both drug and alcohol offenses also include an educational project, which can consist of participation in alcohol or drug education programs, writing apology letters, or involvement in mentoring programs.

RAs are at particular risk if reported for any personal drug violations. “We’ve seen some instances where residential assistants have been fired from their job, and that leads to them losing their meal plan, their housing,” Director of Georgetown’s Student Advocacy Office (SAO) Ben Gaver (COL ’22) said.

Many RAs rely on the room and board benefits, as well as the financial aid readjustment, that come with the job. Those who do face not only financial, but also academic uncertainty if they lose their benefits, as housing insecure students face significantly lower graduation rates than their housing secure counterparts.

Previously, OSC drug convictions resulted in disqualification from financial aid. The Department of Education announced that as of June 2021, these drug offenses will no longer disqualify students from receiving federal financial aid—an announcement which was echoed by the university registrar in a Sept. 28 email.

According to Gaver, if any student is reported for a drug violation, they can reach out to SAO, and a student advocate will consult the student on how to best defend themselves and write a statement of defense to send to the OSC in preparation for the adjudication process.

Disparities in the treatment of marijuana and alcohol begin with the reporting process. RAs are instructed in their manual that if they “suspect the use or possession of drugs based on visual evidence and/or a suspicious order,” they must contact GUPD immediately and let GUPD handle the incident. For alcohol, on the other hand, RAs are not required to contact GUPD and can handle the incident with a greater degree of discretion.

Several RAs have expressed concerns about the effectiveness, equity, and safety of the requirement to immediately contact GUPD. One RA noted they felt uncomfortable when they felt forced to report a student to GUPD during the first week on the job.

“The issue with the drug policy is if RAs aren’t thinking about the consequences for the residents that they’re reporting, then they will just follow that instruction and call GUPD,” they said, and noted that students of color in particular face additional risk from a call to GUPD.

The RA asked about the drug policy during training because there is no other guidance on dealing with drug-related incidents than contacting GUPD. “I was a little surprised that there was only one instruction, while for the alcohol there’s a whole list of them,” they said. “I don’t think it’s appropriate at all to just call GUPD immediately.”

The majority of GUPD interactions with students involve drugs or alcohol, and GUPD has a years-long history of alleged racial bias, discrimination, and profiling. While officers are required to undergo anti-bias training, concerns about racial profiling persist, especially among students of color. In the U.S. nationally, Black people are nearly four times as likely to be arrested for marijuana-related offenses, despite equal usage rates by their white counterparts. The OSC has not released demographic data showing the racial composition of those convicted of drug offenses at Georgetown, but many of the sanctions associated with drug offenses pose a greater threat to lower-income students, who are disproportionately students of color.

During RA training, another RA expressed their concern with the drug policy to a community director via an email shared with the Voice. In the email, they asked community directors if more communal, empathetic responses to drug concerns could be considered, instead of the punitive policy of immediately calling GUPD. As of last month, they have not received a response.

Another RA expressed concern about GUPD’s ability to safely address dangerous situations of excessive alcohol consumption or drug use. “I really have no desire to bring GUPD into my residential community unless I absolutely know that they’re going to be useful or if there’s something that I just can’t respond to and I need to call in somebody else,” they said.

They added that the current drug policy is too brief; the entire RA drug policy totals less than 200 words, and some RAs report feeling unsure of how to best keep students safe without damaging their disciplinary record or career prospects, or exposing them to GUPD.

One RA explained the predicament almost all RAs face: follow protocol, and protect their own employment and financial well-being—or refuse to call GUPD and risk consequences. Those consequences for an RA failing to contact GUPD include a written warning for the first violation, probation for the second, and likely termination for the third, according to the Resident Assistant’s Handbook.

“A lot of RAs do the job so they can get free housing,” an RA said. “That the punishment is a loss of financial aid feels targeted.”

That RA has since found that sending a message to the floor group chat, or simply asking students to quiet down, reduce the presence of smoke, and get rid of the marijuana, has been effective in minimizing disturbances and increased trust between themselves and their residents.

The adjudication process also differs based on the student’s residential status. To be convicted for policy violations off campus, a student’s guilt must be proven “more likely than not.” For on-campus incidents, evidence must be “clear and convincing.”

“So there’s a much higher standard for burden of proof for on-campus violations, as opposed to off-campus,” Gaver said.

This semester, SAO is advocating for raising the burden of proof for students living off-campus to match that of on-campus violations. If SAO succeeds, there would need to be “clear and convincing” evidence for a student to be convicted of a noise, drug, or alcohol violation. This would make students living off-campus less likely to be convicted of Code of Conduct violations and increase equitability based on residential status in the adjudication process.

The official drug sanctioning policy in the Code of Student Conduct also equates marijuana to other illegal substances such as opioids and narcotics, despite their differing legal status in D.C.

Although those official penalties are listed as the same in the Code of Student Conduct, in practice, the OSC differentiates harsher drugs from relatively safer ones, like marijuana, when disciplining students.“From what I’ve been told from OSC, harder drugs are adjudicated in a different way. However, within the sanctioning guide and also within the Code of Student Conduct there is no distinction between the two,” Gaver said.

SAO has proposed changes to the OSC’s sanctioning guide to reflect different disciplinary measures for marijuana use and other narcotics. Last spring, 239 students signed a petition calling for the university to develop a separate policy for marijuana—punitively equal to alcohol—instead of lumping it in with illegal drugs. The petition pointed out that numerous peer institutions in states that had decriminalized marijuana possession also treat alcohol and marijuana violations with similar sanctions. In April 2021, the GUSA Senate passed a resolution calling on the OSC to implement this proposal.

Although there has been little initiative from the university and he acknowledges that change will require a significant amount of time, resources, and legal work on the part of the university, Gaver hopes that their change will make Georgetown’s policies better reflect current D.C. law.

“We proposed to the Office of Student Conduct separating the drug sanctioning to essentially make sanctioning for marijuana and alcohol the same,” Gaver said. “And they were open to our ideas.”

As the nationwide push for federal legalization of marijuana continues, Georgetown may rethink its current policies. Until then, the university’s marijuana policies leaves students questioning the inequalities of punitive approaches to drug use.

“I’m the person who can call in a student at any time and say, ‘I suspect them of using drugs,’” one RA said. “That instantly will result in GUPD coming and forcing their way into the room.”