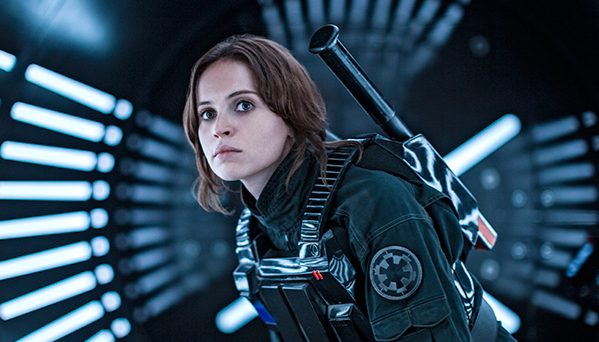 After seven offerings, the elements of the Star Wars series are fairly straightforward: an opening crawl, orphans and desert planets, lightsaber battles, and, of course, endless discussion of the dark and light sides of the Force. Part of what makes Rogue One: A Star Wars Story initially refreshing is that the film eschews typical Star Wars structure in favor of a much wider scope. Taking place right before the events of Star Wars Episode IV: A New Hope, Gareth Edwards’ film offers a much different look at the Star Wars universe as it recounts the story of how the Rebels stole the Death Star plans. Unfortunately, Rogue One promises much more than it can deliver, with flat characters and poor storytelling derailing a frustratingly mediocre film.

The film starts off by introducing the protagonist, Jyn Erso (Felicity Jones), as a child living with her mother and father (Mads Mikkelsen). The Empire sends Director Krennic (played by a delightfully villainous Ben Mendelsohn) to bring Erso’s father back into the service of the Empire to finish construction on the Death Star. The opening establishes the relationship that is supposed to serve as the emotional core of the film. Half of it works: Mikkelsen adeptly conveys his character’s conflict over his role in building the Empire’s ultimate weapon, and his motivations provide a clever explanation for the space station’s ultimate flaw. It is easy to understand how his devotion to his daughter impacts his work, and sets up a nice payoff during the climax of the film.

Unfortunately, the other half of that relationship falls short. Rogue One’s ultimate flaw lies in its protagonist. Jyn Erso simply is not a compelling character. This is no fault of Jones’ performance, although she does not do much to elevate the material. Instead, the issue lies with the screenplay, from Chris Weitz and Tony Gilroy. Instead of giving Erso a clear arc of development, she instead lurches from plot point to plot point, adopting whatever personality the story needs her too. She runs the gamut from rebellious to daring to inspirational to virtuous over the course of the film, coming off as more of a caricature than an actual human being.

The rest of the cast fluctuates wildly. Erso’s eventual partner, played by Diego Luna, suffers from the same writing issues Erso does, and ends up being completely forgettable. Donnie Yen’s blind monk is a scene-stealer, and the robot, played by a motion-captured Alan Tudyk is probably the most compelling character, possessing a sarcastic sense of humor and impeccable comedic timing. Forest Whitaker gives a bizarre performance as Erso’s adoptive father, and he is not present in the film enough to get any real development. His subplot is far too underwritten, and he is cast aside in the story without much of a second thought. On the Empire’s side, most of the villainy is occupied by Mendelsohn’s great performance. He is only let down by the fact that most of his character’s actions involve going to different places and talking to his superiors, or ordering the Death Star to fire. He very rarely gets an opportunity to actually do anything himself.

The other noteworthy appearances come in a litany of cameos. Vader’s cameo was partially revealed in the trailers, and it leads to the best scene of the film during the finale. Other brief appearances provide ample callbacks to A New Hope, but they quickly grow tiresome. The use of CGI to recreate certain characters feels distractingly uncanny, although Peter Cushing’s cavernous cheekbones are perfectly rendered. The drawback to the constant references to the Star Wars mythos is that it distracts from the new characters, and this ultimately weighs down the film.

The film lives and dies by its ability to be a groundbreaking Star Wars film. After all, the pressure on Rogue One is immense. It has to prove that the franchise could survive outside of the episodic structure, and take advantage of a universe with a massive potential for storytelling. Rogue One does this job adequately. As is an unavoidable issue with prequels, the audience knows the ending of the film when they walk into the theater. It is then the job of the storytellers to provide an absorbing journey to that ending. In this manner, Rogue One fails. The first hour is too scattered and introduces too many different subplots to fully develop the new characters. It is definitely entertaining, and a fascinating expansion of the franchise’s universe, but it misses out on the opportunity to create memorable, relatable characters.

This is a problem with the screenwriting, not with the directing. The worlds created by Edwards are visually striking and have a distinct feel. Edwards also proves to be a master at showing the scale and strength of the Empire. By the time the finale arrives, the spectacle is typically rousing, but the emotional investment is not there. Seeing a rebel get blown away, or an X-Wing get shot down for the umpteenth time has no effect because the audience does not know any of the characters. Rogue One provides some thrilling action scenes and memorable set pieces, but misses the human element that made The Force Awakens such a success. Indeed, the film cannot help but feel like a missed opportunity, but it does establish that the franchise can survive with a darker tone and without the Skywalker name.