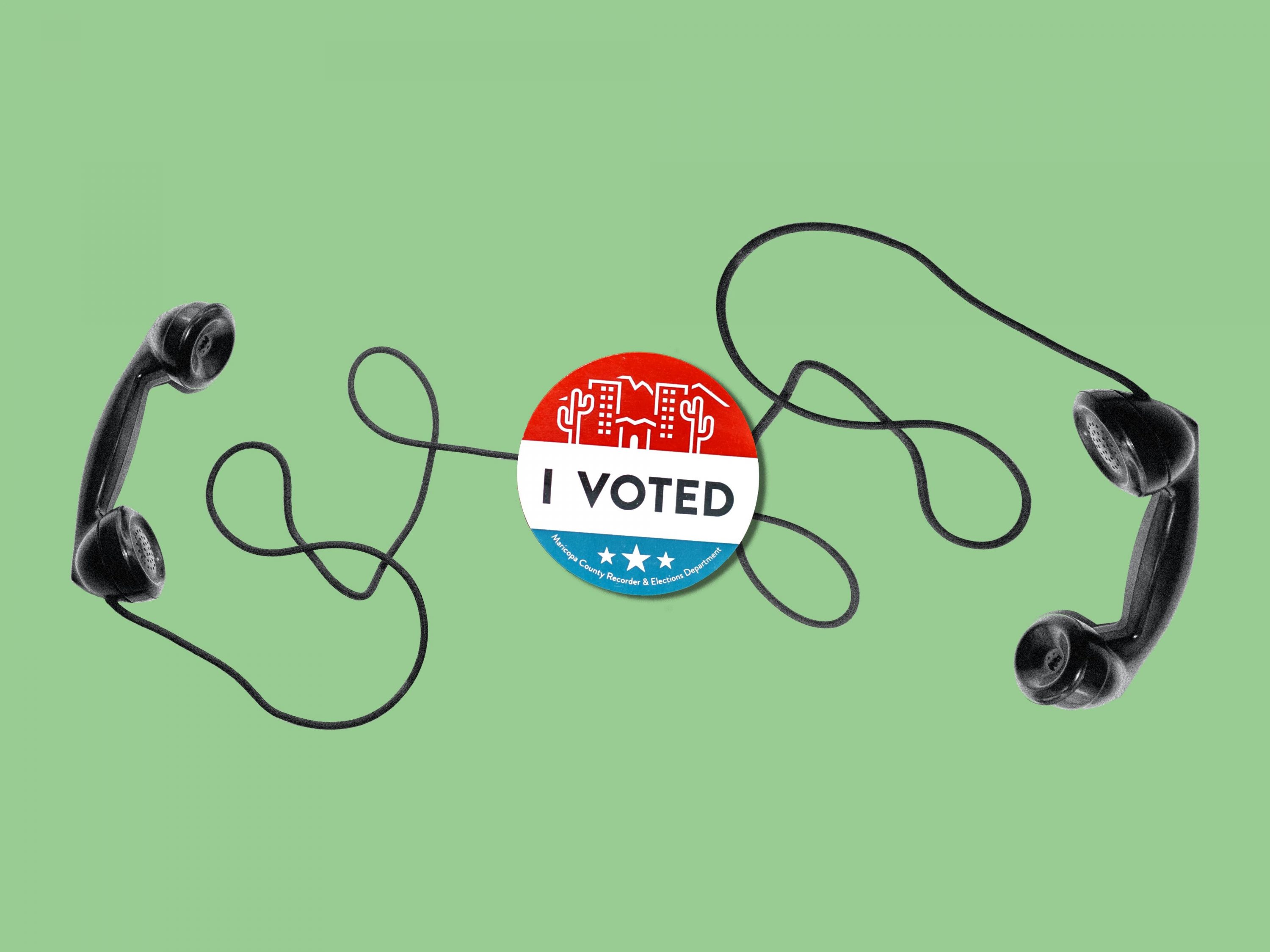 In my free time, I call strangers.

The conversations don’t last very long. In fact, most of the time, no one picks up—and those who do can sometimes be displeased at receiving an unsolicited phone call. But even after the worst of conversations, I know that, at the end of the day, my calls bring me closer to making the kind of political change I want in government.

Phone-banking is a process where volunteers call people—likely voters or people who have requested ballots—and persuade them to vote, often strategically for a specific candidate. Though you can phone-bank at any time on your own, it is usually done through partisan college chapters, issue-based organizations, or the campaigns themselves. The majority of my phone-banks were through Georgetown University College Democrats’ Campaigning Department, who coordinated with state Democratic Parties to turn out the vote for Biden and Democratic Senate candidates. In person, these events often included company and pizza, and you could drop in and out of a two hour session to make as many or few calls as you wanted. In 2020, this means hopping on a Zoom to decide the fate of democracy.

Especially in a world where meeting people in person is dangerous and few Democratic leaders are willing to put people’s health at risk by canvassing, phone-banking is one of the only ways to organize. Though I was a research intern for a Texas Senate campaign this year, many of my friends worked in the Field Department for other campaigns, which essentially meant making hundreds of calls every day. Because campaign organizers generally consider phone calls to be more effective than text banks, and because campaigns compile lists of likely supporters for people to call, I knew that phone-banking would be one of the most important ways for me to spend my quarantined 2020.

In spite of its significance, I always dreaded the activity. I consider myself a people pleaser. I don’t like to take up people’s time, and I like to end conversations without conflict. As a result, it took a long time for me to learn how to speak on the phone conversationally without awkwardness.

On a good day at the phone-bank, you actually end up talking to someone. On a bad day, phone-banks are unbearable. I, like anyone else who has phone-banked, have insane anecdotes of conversations I’ve had. In a phone-bank for Michigan Democrats, I was cursed out for asking for a registered Democrat named Valerie. With Texas Democrats, I wasted fifteen minutes engaging with a COVID-19 conspiracy theorist, even though arguing is exactly the opposite of what you’re supposed to do at a phone-bank. For Arizona Democrats, I spent ten minutes having a pleasant conversation with a man I was encouraging to vote for Biden, only to realize at the end of the call that the man had already voted straight Republican down the ballot.

Sometimes, phone-banks brought in guest speakers. I nearly missed Shawn Mendes and Lucy McBath on a March for Our Lives phone-bank to encourage young people in Georgia to vote. I went to a Texas Democrats phone-bank with Oscar-award winning director Dustin Lance Black. For various Georgetown Democrats phone-banks, the organization would bring in the candidates themselves. Those phone-banks felt particularly rousing, virtual events whose speeches energized volunteers into making those grueling calls, reminding us of the issues that were at stake, that had real impacts on people’s lives.

But the glitz of celebrity guests make up only a small portion of a phone-banker’s time, most of which is spent in company with other phone-bankers. There is something about the camaraderie of being with other phone-bankers, a sentiment I feel most sharply on the days I end up phone-banking alone. Getting yelled at, hung up on, and argued with is hard to master when you are sitting alone at home, in an already isolated pandemic status-quo. There have been countless instances when I burst out crying after a demoralizing conversation, afraid to dial the next number. But when you can tell someone about your experience—and they sympathize or laugh along with you about those horrible calls—phone-banking is more manageable and sometimes even enjoyable. With time, the failed calls no longer got to me. On paper, phone-banking is about numbers, about getting each additional voter possible—but in reality it’s also about being in a space with other phone-bankers that allows you to maintain the capacity to keep going.

That’s not to say that all my calls have been disappointing. In fact, some of them have been amazing. There is no better feeling than helping someone vote who is having trouble with the process, or tilting an undecided voter towards voting for your candidate. I once talked to a woman who thanked me for my time spent volunteering, and told me that young people are what makes her hopeful about the future. Phone-banking means talking to the worst of the country, but it also means talking to some of the best. Democrat, Republican, Independent, Undecided—you never know who you are going to get on the other end of the phone, and the experience can shape the way that you view the world, especially when they realize that the person on the other end of the phone is not a robocall, but a real person willing to listen to their opinions.

At the end of the day, phone-banking is fundamentally about channeling your emotions into productive change. As more of my family and friends got COVID-19, I wanted to do anything I could to demand a better governmental response. John Lewis and Ruth Bader Ginsburg’s deaths were two of the most overwhelming experiences of 2020, leaving many feeling powerless in the face of systemic racism, climate change, gun violence prevention, immigration, reproductive rights, health care, and more. The electoral process will never be enough to solve all of these problems, especially because candidates are imperfect. But that doesn’t mean that elections don’t matter, or that the impulse you have to make change must go unrealized.

Joe Biden won Georgia by 0.29 percent of the votes, Arizona by 0.30 percent, and Wisconsin by 0.63 percent. Mark Kelly won Arizona by 2.4 percent. Cal Cunningham lost North Carolina by 1.7 percent. Gary Peters kept his seat in Michigan by 1.5 percent. Straight-up campaigning doesn’t always work. In a world as polarized as our own, it’s unlikely that everyone—or even a few of the people you talk to—will change their mind. But if everyone got one extra person to vote, an election would be swung. A Senate would be flipped. A key piece of legislation would be passed.

In the words of Dustin Lance Black, phone-banking is a way to “double your power as a voter.” With just one phone call, you are powerful indeed.

More: covid-19, Election, get out the vote, phone-banking, Voting