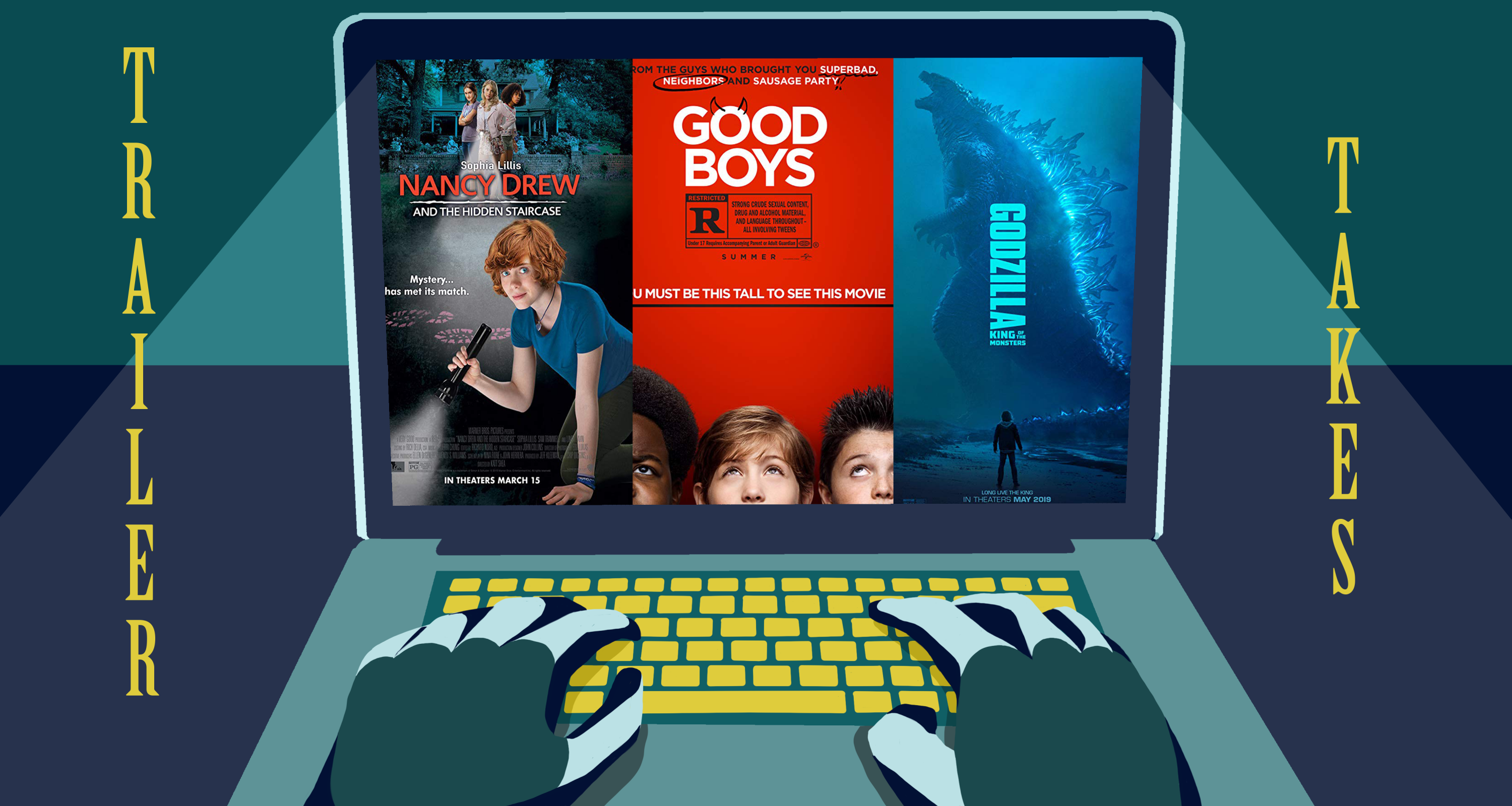 Sky: Oh man, if this movie had come out when I was 10 years old I know I would have been all over it. The kind-of-scary mystery, the modern rebellious take on Nancy’s (Sophia Lillis) character, and Nancy’s epic girl squad would’ve had me hooked. Now, however, the glaring flaws in this movie are just too prominent for me to look past. As my fellow writers have already pointed out below, in this movie, Nancy’s signature adventurous spirit, playful charisma, and headstrong persona are used to show how much of a not-girly-girl she is. Specifically, a blonde, stylish girl is clearly used as a foil to Nancy in an apparent frenemy relationship, even drawing the comment from Nancy, “Mean girls go first.” @Nancy and all the writers of this movie, please check your internalized misogyny. Also, between an adult flat out listing her qualities and specific scenes that are included just to highlight a seemingly “unique” aspect of Nancy’s personality (like pretending to drop a test tube), this movie seems like exposition central. I actually remember reading Nancy Drew as a kid and generally enjoying the books. While I of course thought of Nancy as an impressive heroine, I cared much more about the actual mystery than the protagonist because the books themselves spent much more time on plot than characterization. In a way though, this method still allowed Nancy to shine: You don’t need someone to say that she’s brave if you can just see her unflinchingly investigate a somewhat-creepy clue, which would be needed to advance the plot anyway. With this movie, as with many remakes, it seems that less (meaning sticking closer to the original) would have been more.

Katie: To start off, I must admit that I’ve never been a huge Nancy Drew fan so my interpretation of this trailer could be missing something, but there is one thing about it that distracted me the whole time—does Nancy Drew (Sophia Lillis) really need to ride skateboards and wear flannels to be badass enough to solve crime? As much as girls don’t need to fit the stereotype of “girly,” there is something to be said for embracing femininity, for lack of a better word, and being smart and badass at the same time, something that Nancy Drew is historically known for. I think by trying to break stereotypes here, this movie is actually falling into the Hollywood trap of the “I’m not like other girls” cliché. Every supporting character other than a shamefully token black friend has long blond or brown hair seemingly in order to emphasize just how different Nancy is, which seems contrary to the statement this film is trying to make. What’s wrong with other girls? Nothing! I definitely will not be putting aside the time to see this movie, but hope that die-hard Nancy Drew fans get the modern day remake they want in this film!

Inès: When I was a kid, I read the books, both the regular Nancy Drew books in English and the French version Alice Roy (don’t ask me how that name translates, I don’t know). I also loved the 2007 film Nancy Drew which starred Emma Roberts and made me look up to her. I learned about the Miranda Rights in that movie, and it was a great blend of child-level thriller and fun. I don’t know whether that movie holds up today, but I know it’s biased me against this new remake because everything in the production of this trailer, the WordArt-level font especially, jumps out at me. I’m not sure I like the premise, I’m not sure I like the supporting cast, and I definitely feel too old to watch this teen Disney-esque film. I will say that I don’t hate the tomboy-style Nancy, but it feels like a cliché that doesn’t reflect 2019 feminine power but 2008 era [insert an iteration of a Cinderella story here] type of character that superficially isn’t a “girly-girl.”

Sky: Alright, I don’t like monster movies and I don’t like apocalypse movies, so I feel like this is just not the thing for me. This movie seems like Jurassic Park (1993)/World (2015)/whatever sequel they’re on now but with much higher stakes. I don’t understand what makes Godzilla so special as a monster when he kind of just seems like a giant lizard? I’m also very confused because Godzilla is not the only monster in this trailer, and the title “King of Monsters” implies that there is some kind of intra-monster conflict that is going to happen. This really confuses me: Am I now supposed to root for Godzilla? Will the monsters destroy each other or will they destroy the Earth first? Was the real Godzilla the monsters we made along the way? While these are all extremely pressing questions, I still don’t think they will actually compel me to pay money for or spend time watching this movie.

Katie: Have there been a lot of Godzilla movies? I honestly don’t know, but it seems like at least a thousand. Of course, I’m also grouping in all of the other massive-monster-destroys-a-city movies. This one seems to have *gasp* MULTIPLE monsters, which from the title I assume are all defeated by this “Godzilla” creature. That is about all I have pulled from this very short trailer. I think there is an audience for this type of movie, but personally I find the whole genre cliché and quite boring. I did look up the cast that is briefly shown and it seems to be pretty solid (Millie Bobby Brown, Bradley Whitford, Thomas Middleditch etc.) and it looks like there will be some promising action scenes and excellent graphics work, but I personally will not be taking the time to go see it.

Inès: Ok, so I have never seen a Godzilla movie before, and have never felt the need to. Not to sound superior, but I just don’t get the appeal of a movie with a monster who is attacking the world and very little plot beyond that. And I will sometimes watch movies with little to no plot, so that’s really not saying much for this franchise. This is a mercifully short trailer which shows that the premise involves there being more than one monster, they’re fighting, and humans are in the midst of this in some way, probably mostly as collateral damage and for the purpose of narration. The sad and dramatic music does not draw me in, and I have basically an abnormally high level of indifference towards this movie and everything about it. I just can’t find it in me to care.

Sky: This movie immediately strikes me as a counterpart to Bo Burnham’s Eighth Grade (2018), except less accurate, more comical, and with a group of boys instead of a solitary girl. I thought that the opening of the trailer with Seth Rogen explaining how the boys could not watch the movie that they themselves are featured in was very clever (reminding me of how eighth graders could technically not watch the movie Eighth Grade), and established the film as both more raunchy and less-idealized than other middle school flicks. Ultimately, this movie seemed very funny and I liked how there were some scenes in which I found myself laughing at the characters, and others laughing with the characters. I definitely caught myself relating a little bit too hard when one of the sixth grade boys pointedly inserted F-bombs into his speech to appear tough as he vindictively explained that a juice box is not a sippy cup. Overall, this movie seems like it will have a lot of laughable bits, even though some of the overarching plots, such as the one with a drone spying on the two girls, seem a little questionable. Out of all of the trailers this week, though, this is definitely the movie I would most want to see.

Katie: Ok, this was funny. Like a really funny, well done trailer, especially the “restricted” opening. I feel like I have seen the whole movie, but even if this is the whole movie, it looks charming and like a sweet celebration of devoted friendships in those awkward, terrible middle school years. I doubt I will take a whole trip to the theater for it, but I hope to catch it at some point on a plane or something. Kudos to the kids as well, because they look both fantastic and professional as well as legitimately funny. On this note, as the hilarious Stranger Things (2016) reference reminded me, I just have to recognize how impressive child and teenaged actors are and how recently they have been showing up their adult counterparts in a big way. When I was 13, I was scared to even see myself in a mirror much less be on camera … it was a dark time. Although that sentiment is probably more relatable than anything these boys do in the movie, I really do hope that it is as good as it looks!!

Inès: I like the way the trailer is meta; the trailer genre could use a glow up honestly. It’s a bit on the nose here, but I like the initiative and the commentary. The movie itself looks like it’ll be funny, a regular fun movie—not one I’d necessarily go to the movies for, but I’ll definitely watch this on streaming. The vibe of the movie is a bit like a cross between The Hangover (2009) and a trope movie about middle school boys. It’s funny because of the sex and drug jokes, and the foul language, but it’s successfully funny because of the boys’ naiveté. So I’m here for it. A smart comedy that isn’t high brow is my idea of a fun movie night with friends. 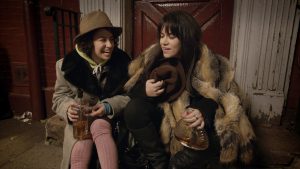 You all have terrible taste lol. Godzilla looks fantastic

Godzilla is going to be so much fun!