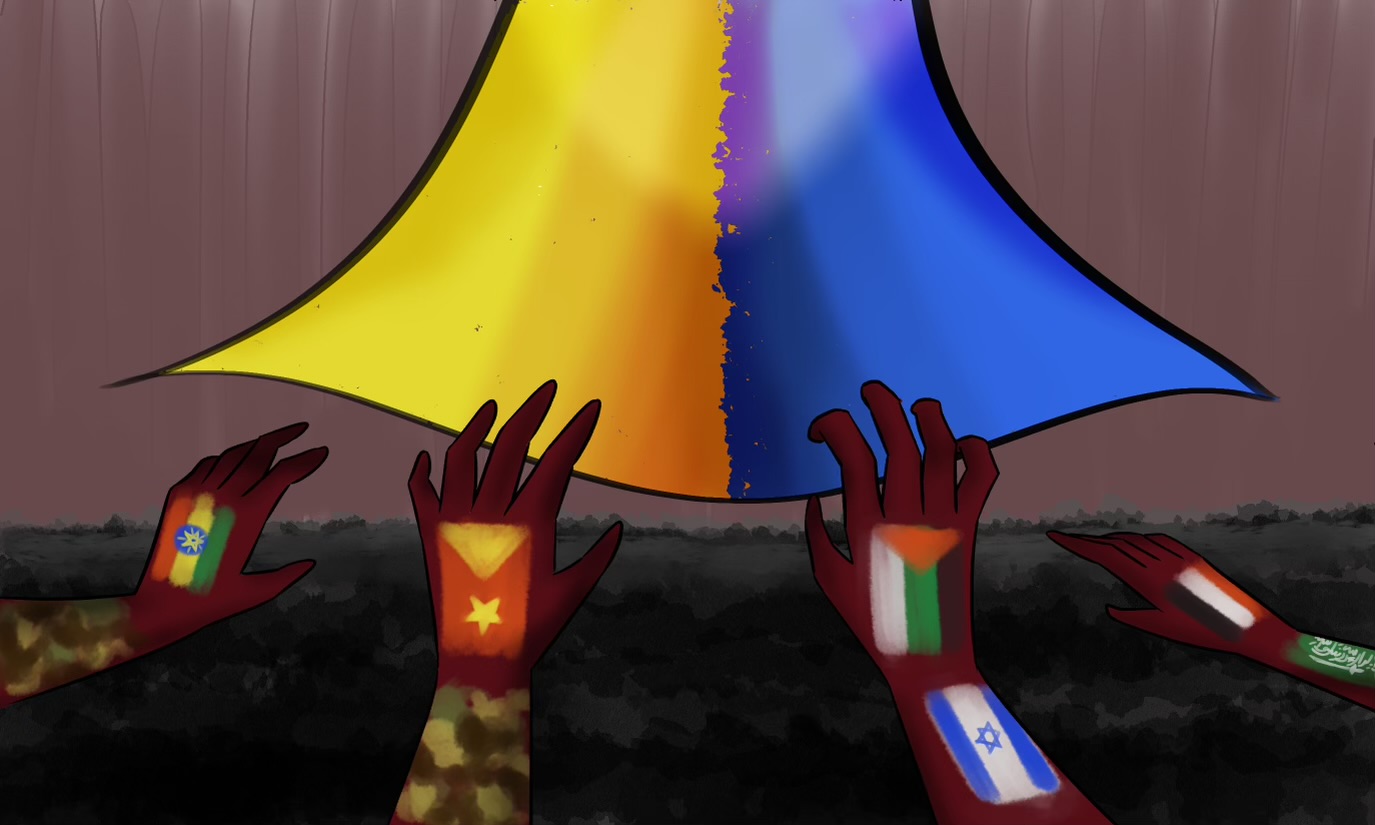 Just eight hours after the Russian military began its invasion of Ukraine, the SFS hosted a town hall on the crisis. Statements of solidarity with Ukraine from top university officials followed. The hundreds of students and faculty gathered in the ICC Galleria that afternoon testified to the university’s commitment in engaging global challenges. The university mobilized its faculty and programming resources when the moment demanded it. In supporting campus-wide engagement with the tragedy, Georgetown did the right thing.

We only wish that happened more often.

The world is rife with crises, and for Georgetown to call its campus community truly engaged with global affairs—as it does in admissions brochures—it should organize event programming and mobilize the community to engage with conflicts that, as of now, the administration has left largely unaddressed: the Tigray War, Israeli airstrikes in Gaza, and Saudi Arabia’s bombing of thousands of Yemeni civilians, among others.

Students are eager to participate in dialogue about these subjects, whose humanitarian tolls are just as heartbreaking and unthinkable as the Russo-Ukrainian War. To live up to its commitment of a “global perspective,” the administration should consistently highlight and fund campus efforts to engage with these events. Let Georgetown’s ongoing response to Ukraine guide its future engagement with world affairs, no matter the region or race of the affected.

Whether the culprit is misallocation of campus resources or unwillingness to engage politically, the university engages with global conflicts inconsistently. Consider, for instance, the war in Tigray that began in 2020: by the time the Ethiopian government and Tigray People’s Liberation Front struck a humanitarian truce last month, the war between them had killed half a million Ethiopians, and displaced over two million. The Ethiopian government’s blockade of Tigray has left some nine million Tigraians malnourished. Georgetown’s most recent programming was a series of three Berkley Center articles published over eight months ago. Surely the university could have offered more opportunities for education and advocacy once students returned to campus last fall.

When posters advertising Israeli Apartheid Week were recently torn down in Red Square, the school’s official response consisted of nothing more than a mass email commenting briefly on Georgetown’s commitment to free speech, with no explicit reference to the posters’ subject. While the school’s condemnation of tearing down the flyers, especially a designated free speech zone, is laudable, its failure to even mention the occupation of Palestine—the very topic being silenced—is glaring. Last May, when Israel launched airstrikes, students received no official university communication acknowledging the escalation’s impact on Georgetown community members, most especially Palestinian, Israeli, Jewish, and Muslim students. Any campus effort to support Palestine and Palestinians comes primarily from students and faculty, without institutional support for awareness through education.

We cannot know for sure why the university has decided to not engage with some conflicts. It seems possible that Georgetown’s notable supporters and donors influence its politics; the university may not want to step on the toes of those who fund its many chairships, programs, and scholarships by financially or organizationally engaging with some student activism. Then again, maybe Georgetown’s administration simply isn’t that invested in engagement surrounding Palestine, Tigray, or Yemen.

Both undue donor influence and a lack of care are inexcusable at a school committed to giving its students a “global perspective.” To mitigate those issues, the administration should invite students and faculty to deliberate and decide on a transparent set of engagement guidelines that would empower the university to support events and issue official statements for global issues the way it did for Ukraine. Official statements are inherently politicized—but it would be categorically better for everyone to know that those statements were guided by student- and faculty-mediated guidelines rather than suspicions that the university chooses to care more about Ukraine than elsewhere.

Still, administrators have a school to run and students to serve, goals which are more important than commenting on and helping organize events responding to every conflict; Georgetown’s administration cannot realistically address every global injustice equitably. But faculty could: Improving resource distribution across programs and departments would give faculty a much better shot at giving the Georgetown community better opportunities to engage with international issues, each calling for our attention and their expertise, with or without the administration.

Map of the Modern World (INAF-008), for instance, fails to include any content on the issues of racial and gender inequality within its “Beyond Borders” lecture. Other core classes such as International Relations (GOVT-060) and Comparative Political Systems (GOVT-040) are known for inconsistencies in syllabi between sections. One International Relations section, for example, spends 3 class periods on global terrorism, and another on the wars in Iraq and Afghanistan, without once citing an article by a non-white or Muslim scholar. Students are often taught skewed takes on world affairs that fit within models of neoliberal international thought that neither give students adequate context nor push the boundaries of political thought toward a greater focus on global justice. Unsurprisingly, these fundamental flaws and oversights in our curriculum limit the student body’s ability to critically engage with global issues.

Not only should Georgetown set up transparent mechanisms to create spaces for public engagement, it should also better fund and bureaucratically support efforts to foster dialogue. It should create courses around issues that are obstructed by Eurocentric understandings of what conflicts are worth our attention. Material support will only fall short if Georgetown cannot fundamentally reframe how students receive the “global perspective” they were promised.

Making these structural changes will take time. But students have already spent too much of their time and effort these past few years highlighting marginalized international issues and petitioning for a less Eurocentric curriculum without substantial help. It’s the administration’s turn to work with students and faculty to make Georgetown into the global education environment it should and can someday be.

Editor’s note: this article has been updated to specify additional information about the war in Tigray.

Georgetown’s most recent programming on Ethiopia was more recent! Professor Smith hosted great events on the Tigray conflict on October 7th and November 1st and another one just a couple weeks ago.

The finance minister from Somalia came to Georgetown in February and precisely 5 undergraduates showed up. So spare me the admonitions about the admin and faculty not devoting attention to these parts of the world… and the pieties about how genuinely interested are the students.

Respectfully, the publicity was terrible.